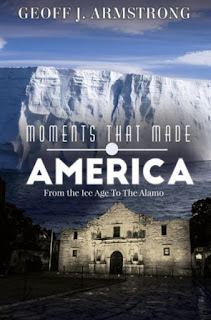 BOOK BLURB:
From its geological birth during the breakup of the Pangaea supercontinent millions of years ago, through the nation-shaping key events that led to its political independence from the British superpower, and other crucial, sometimes miraculous events that worked to create the nation, Moments That Made America: From the Ice Age to the Alamo explores those defining moments, both tragic and inspirational that profoundly shaped the nation and its people - crucial turning points that worked inexorably to mold and make America. These pivotal "tipping" events formed America's geographical, sociological, political and historical landscape. Part 1 culminates with the discovery of gold in California and the role it played in fulfilling America’s dream of Manifest Destiny.


ORDER YOUR COPY AT AMAZON: