'Deeds of a Colored Soldier during the Rebellion, Volume 1: From the Beginning to Chickamagua' by F.W. Abel 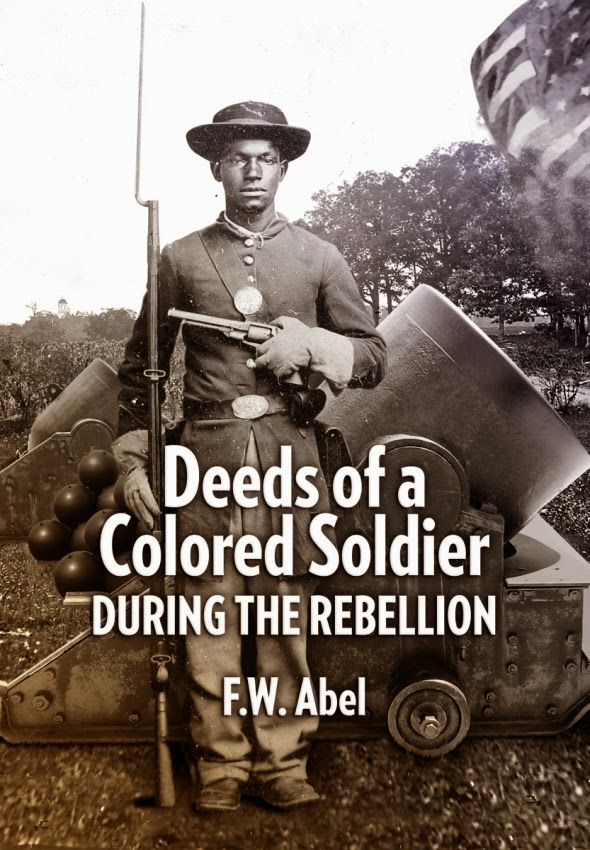 Deeds of a Colored Soldier during the Rebellion, Volume 1: From the Beginning to Chickamagua is a novel of the Civil War.  Written as a memoir as told to an interviewer more than thirty years after the war’s end, it traces the story of Jedediah Worth, a teenaged slave who becomes a soldier fighting for the Union and the freedom of his people.

At secession, although he vaguely realizes that the conflict started over the question of slavery, Jedediah regards Kentucky, and the South, as home.  When his master’s sons join the Confederate army, he and his friend Obie accompany them as their personal servants.  Eager to prove himself as a man, Jedediah runs ammunition and even rescues a wounded Confederate until, with Obie’s prodding, he comes to realize his valor should serve the cause of emancipation.  He escapes, meeting up with Samson, an enslaved African who becomes his life-long friend.

Jedediah and Samson travel hundreds of miles to Kansas, to join one of the few units of colored troops allowed to serve in the early part of the war, and participate in the first battle fought by colored troops, the victory at Island Mound.

Gaining confidence in his abilities, Jedediah becomes a non-commissioned officer, leading his men during the brutal, hand-to-hand combat at Milliken’s Bend, where the Confederate promise no quarter will be given to colored troops, and where he becomes the first colored soldier to be awarded the newly-created Medal of Honor.

One of Langston’s most prominent citizens, Jedediah Worth, passed away yesterday peacefully in his sleep, just two months short of his 71st birthday.
Mr. Worth was well-known in Langston City, having served as our sheriff for more than a decade.  Before settling here, Mr. Worth had a long and notable career in the United States Army, during which he rose to the highest non-commissioned officer grade, Regimental Sergeant-Major, in the celebrated 10th U. S. Cavalry.
He was the recipient of the highest award the nation bestows for bravery in battle, the Medal of Honor, not once, but twice, a feat almost unique in the annals of the American military.  He was the first Negro to be awarded the Medal, for deeds of valor performed during the Rebellion, when he was only seventeen years of age.
A widower when he died, of Mr. Worth’s children, two still survive: Jubal, his only son, and Harriet, a daughter.  His funeral will be held at 10:00 a. m. tomorrow at the Bethel Baptist Church.

This obituary, clipped from the Langston Herald, gave me deep sadness when it arrived from Oklahoma.  For I had the privilege of knowing Jedediah Worth for more than twenty years.
I saw him for the first time in the spring of 1891, when I was a reporter for the Washington Colored American.  Sergeant Worth was among the heroes from the Negro regiments sent to Washington as an honor guard in the nation’s capital.  Our meeting was brief.  Because White soldiers objected so vigorously to their presence, the Negro soldiers were quickly sent back to the frontier.
I met him again in the fall of 1898, when he was the Regimental Sergeant-Major of the 10th United States Colored Cavalry, the famed “Buffalo Soldiers.”  The 10th Cavalry had just returned from “the splendid little war” to free Cuba from the Spanish.  Because the authorities feared the tropical diseases to which they had been exposed might become epidemic among the general population, soldiers returning from Cuba were quarantined.  The men, White and Negro, were kept in a camp established at Montauk Point on Long Island, some 130 miles east of the city of New York.
The Colored American sent me out to Montauk to interview Negro soldiers about their experiences in the war.  My editor was concerned that their contributions would not be acknowledged by the white-owned papers.  Indeed, if you read only Hearst’s New York Journal, you would have thought that the only regiment that did anything of note at all was the 1st United States Volunteer Cavalry, Theodore Roosevelt’s headline-grabbing “Rough Riders.”  The Colored American was determined that the fortitude and pluck of the Negro soldiers be publicized.
(I suppose things have not changed much since then, as the paper is sending me off to France with the 15th  Regiment of the New York National Guard, newly re-designated the 369th Regiment.  We are determined that this latest group of Buffalo Soldiers not be ignored, either.)
Upon my arrival at Montauk, the officer acting as the liaison with newspaper reporters and correspondents gave me leave to enter the camp of the 9th and 10th Cavalry Regiments, and the 24th and 25th Regiments of Infantry, all of which were composed entirely of Negro enlisted men.  He advised me to make the acquaintance of each regiment’s sergeant-major, the highest-ranking enlisted soldier in the regiment.  The sergeant-major, even more than the regiment’s colonel, was the man who made sure the enlisted men were trained and disciplined, sheltered and fed.  In short, he was the man responsible for having the men behave and carry themselves like soldiers.  In this way, I was re-introduced to Sergeant-Major Worth.
You might expect, given his responsibilities, to find a dour, humorless, authoritarian man, quick to admonish and slow to praise; harsh, even brutal, made narrow-minded by the need to enforce discipline and regulations.
As I interviewed his men, I discovered the affection and respect in which he was held, not only by the soldiers, but by the white officers also.  I shy away from the term “legend,” but there is no other way to describe the man, as can be intimated from just reading his obituary.
Of course I wanted to find out more about him, but when I approached him for an interview, he refused and insisted that my news reports be about his soldiers, of whom he was intensely proud.  But I am a reporter, a “news-hound” if you will, and over the course of several weeks was able to question Sergeant-Major Worth about his life and military career, and learned even more in subsequent meetings through the years.
It took me a long time to get to know the man.  Even now, I recall that when I first looked on his weather-worn and war-scarred visage, how I concluded that the crow’s-feet around the eyes had to have come from squinting into the Southwestern sun and the lines about the mouth etched by the strain of having to immediately judge the correct course of action during battle.  I know now that they were equally the result of laughter.
It is only now, years after I met him and two years after his death, that I am able to set his story down in chronological order.  Apart from some endnotes I added in clarification or support of his reminiscences, the words are those of Jedediah Worth, a slave who became a soldier, a soldier who became a hero.

That night, Obie and I were moved into the same loft to sleep.  Below us was the stable housing those saddle and pack-horses going with us to the army.
As we bedded down, Obie began to talk.  “Jed, remember what Maddie said today?  What would you do if you were free?”
“I never gave it no thought before.  It didn’t ever seem possible.”
“Why not?  There’s free coloreds, you know.”
“I knew that.”
“So what would you do if you were free, Jed?  If you didn’t have t’ tend the master’s horses?”
“I like tendin’ horses,” I replied.
“You don’t mean to say you like shovelin’ manure,” he said mockingly.
“No, not that part.  I guess I’d rather be a jockey or a trainer, and just ride the horses and let someone else shovel the manure.”
“That’s all?  You want nothin’ more than that?”
“Well, there ain’t no sense spendin’ so much thinkin’ about it,” I said crossly.  “You’all might as well go t’ sleep, cause there ain’t anythin’ you can do about it no how, Obie.  Freedom’s about as real as whatever it is you’ll dream tonight.”