My Death: A Personal Guidebook by Jeremy Kagan 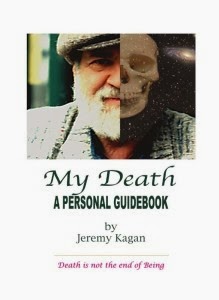 
This is a powerful memoir of a near-death experience. After a Native American sweat lodge, the author loses control of his body and then his life. He begins a passage that leads to a personal hell. He discovers a way to escape and emerges into an amazing exploration of the soul’s journey. In this intense adventure, there are insights into stages of consciousness and encounters of blissful perfection. This spiritual, inspirational book is meant to be an aid to removing the universal fear of the final journey we are all taking.


I was with a high school buddy who told me that his greatest fear is dying and death. I wanted to comfort him. I thought if I shared my personal experience to that ‘undiscovered country,’ it could relieve some of his anxiety. And that is what I want to do for all those who read this. I’d like to make it easier to navigate where we all are headed.

It was the evening of a cold Sunday on the thirteenth day of December in Los Angeles, California, The United States of America, planet earth, the Milky Way. It was the day before my birthday.

My whole body was sweating. Every pore was oozing. I had never been this hot. I could barely breathe. Would I survive?

I was in a sweat lodge. These ‘sweats’ are purification rituals where you join a group of people, often strangers, and you all enter a dark enclosed space that gets very hot.

I had done sweats before. In the darkness I had shared wishes, confronted issues of life and death, and I had sweat. A lot. In these previous sweats, I had been able to deal with the discomfort. Later I learned about an infamous case where people died in a sweat that was improperly prepared, poorly led and overcrowded. I wonder if I would have gone to this particular sweat had I known people died in that one. But you can die anywhere.

Sweats were always a test for me. A lot of my life has been about passing tests.

I was in one of those transitional phases in life where I figured I might learn something from this kind of uncomfortable encounter. It seemed like a good way to sort some things out. Join in a circle of other humans in the dark. In the heat.

I had been working in the film world as a director and I had a fairly successful career up to then. But I was troubled about my future. Earlier that afternoon, I had attended a party in Topanga Canyon with a friendly crowd of Hollywood movie co-workers and ‘wannabes’ and a number of ‘has-beens.’ It was Christmas time in Los Angeles and it was all good cheer, jingle bells and twinkling palm trees.

At the party I talked about the film project I was working on and others talked about theirs. As the sun started to cast shadows, I knew it was time to move on. I made a circuit through the rooms, saying my goodbyes and thanking my hostess. She wrote a feature I had directed some years back. We liked each other, even though we rarely stayed in contact. That was the way of things for me in the movie business. I would get close to my crew and cast when working on a film. We would become a family; but after the film was done, the relationships would dissolve. If I ran into someone years later, there might be a hug and a few shared memories, and then we would drift away to our separate lives.

I climbed into my white 1981 Avanti and drove off. I liked this car. It was a classic coupe with a sleek design and red interior upholstery. Now I wasn’t a car person and could barely fix a flat tire, but when I saw my first Studebaker, I became a fan. This handsome vehicle was its last iteration. It got a lot of attention on the street. I liked to tell the story of how it was made.

The great industrial designer Raymond Loewy had his associates conceive the car in two weeks. He isolated them in a desert town where they were denied drink and women. The result was an auto that has feminine curves. It was also a car that had saved my life once. A torrential rain had turned Los Angeles streets slippery. I was driving a curved road in Beverly Hills, and suddenly the Avanti went into a 360 degree spin sliding toward a telephone pole on the driver’s side.

This was going to be bad. But to my surprise, the car stopped inches short of crashing. I breathed easier and was very grateful. Whatever and whoever was watching over me had decided not to kill me then. I had heard that you have a number of close calls before your actual death. This was one of mine. There were others.

So here I was now, in my Avanti, driving fast along the Pacific Coast Highway. I was heading into the Malibu Mountains. The route was lonely, full of curves, and sparsely inhabited. I was already late. It was a bad habit of mine back then.

My mind wandered and worried. The other sweats I had done had been strenuous and unpredictable. I’d seen things in the blackness.

Often the heat had been so heavy, I had wanted to leave before the ceremonies were over. In the past I had stayed to avoid the embarrassment of what I thought would be seen as failure. How would I handle this next sweat? Another test.

Thoughts of what might occur in this sweat pre-occupied me. I suddenly realized I was lost.

I had passed the junction for the turn off and gone way too far up the road. I pulled over and switched directions. I headed back down the mountain more slowly, paying attention to where I was.

Would I find the way in? Around the next corner, a small signpost pointed to a narrow dirt road. It read The Wright Land. This was where I was supposed to go.

The Avanti, somewhat of a low rider, wasn’t meant for rough roads. It bumped over the pits and rocks through a narrow passageway that led up a hill. Enormous red boulders threatened to scrape the doors. I bounced around until reaching a crest, which opened up to a large plateau below. In the distance was a dramatic cliff that dropped off into the ocean.

Vehicles were lined up on the grassy field below. Clearly, the other participants had already arrived. I drove down the hill and parked. I got out and hurriedly grabbed some towels from my back seat. The sun had not completely set, so even though late, I knew there was still some time before the ritual would actually begin.

I decided to walk up a little mound next to an unfinished home on the cliff. The structure was designed by Frank Lloyd Wright and belonged to his grandchildren who owned the property, hence The Wright Land. On this knoll, the ground was marked out with white stones in the shape of a prayer wheel with its spokes extending in the cardinal directions. I stepped into the circle and sat on the cool ground. I was trying to center and calm myself.

The sun was creating a golden red sky. I tried to slow my breathing. Get peaceful. It didn’t work. I was still a little anxious. I stood up.

I turned, walked down the hill, and passed a lily pond with croaking frogs. I hiked up an incline through red tan sandstone outcropping. Behind these rocks was the sweat lodge.

The structure looked like a sphere cut in half. Created by bending and interweaving branches, it was about six feet high in the center. It was covered with a variety of faded quilts, so that it looked like a big colorful upside down teacup. The coverings are used to keep in the heat and the dark.

In front of the lodge was an open round fire pit filled with logs and thirty-six football-sized volcanic rocks. A shallow dirt channel led from this fire pit to the lodge. It’s called the ‘spirit pathway.’ You are not supposed to step over this channel which is as a sacred space for the heated rocks to enter the lodge. You avoid crossing the path to keep the energy flowing. That’s how I understood it. No human interference.

Like many lodges, this one had a small entrance flap. In front of it was a collection of various totems including a carved whale bone, eagle and owl feathers, an indigenous medicine pipe, a Yaqui Indian rosario which is a beaded paper flower necklace, and a reindeer horn from Russia.

Many of these symbols resonated with me. Some recalled my Russian ancestors. I had learned the language while in high school. Much of the culture appealed to me including the authors Tolstoy, Dostoevsky, Gogol, the music of Tchaikovsky, balalaikas, icons, vodka, lacquer boxes, the revolution and the genius film director and writer Sergei Eisenstein.

He was my inspiration to become a filmmaker. Of course, there were the negative Russian associations as well, like the slaughtering Cossacks and the pogroms persecuting the Jews. This was one of the reasons my grandparents left that country.

The owl feathers also resonated. This bird had been a totem animal for me. An image of an owl had appeared during a previous sweat. My eyes had been open in the darkness of that sweat, and though the space was pitch black, I saw this owl clearly. Later I looked up the owl’s significance in other cultures. In one tradition, it is a messenger from unknown worlds, including the world of the dead, whatever that was.

The totem of a whale bone reminded me of the stunning songs of humpback whales I had heard on a vinyl record back in New York when I was a graduate film student. Their otherworldly deep ocean sounds suggested a hidden knowledge. These giants possessed a long distance communication ability way beyond our comprehension.

All these items - the whale bone, the feathers - had been brought to the sweat by my friend Michael. He had introduced me to these Native American traditions.

I met Michael when I was approached to be the director of an ill-fated movie about a clown who was imprisoned with children in a Nazi concentration camp.

As we exchanged histories, it turned out that a month before, unknown to each other, we had been at the same Yaqui Easter Indian ceremony outside of Tucson where participants wore masks and mixed Catholicism with Indian myths. The theme of that ritual was death and resurrection. We were among the few white people in attendance.