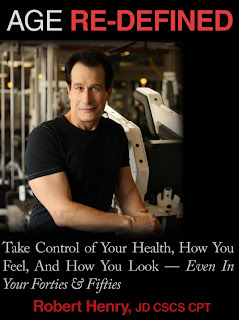 
Your state of health, how you feel, and how you look are more within your control than you think – even in your forties and fifties (and beyond). This book addresses exercise, fitness, nutrition, wellness, and the mind-body connection. Its purpose is not to promote a particular exercise program or a particular diet plan – although its coverage of exercise, fitness, and nutrition is extensive – but rather to inform, educate, and motivate the reader on the importance of being proactive in one’s own health, fitness, and wellness.

Even if you are already physically active, this book can assist you in evaluating the effectiveness of your current exercise efforts. A foundational background in exercise and fitness concepts is provided. Not only does this book cite to numerous authoritative sources, but it also conveys the author’s own philosophy of exercise and an informative overview of his own exercise and nutrition regimen. The author, who is 56, shares his own motivating journey and the positive results he achieved through exercise, nutrition, and the mind-body connection, with particular emphasis on the challenges faced by him in his early fifties and the favorable results he achieved at that age by “re-booting” his commitment to health and fitness.

The importance of nutrition is explained and heavily stressed. A Registered Dietician with a Master’s Degree in Nutrition is a contributor to the nutrition content. One comes away with an awareness of quality nutrition and its role in optimal health, fitness, and wellness, and with a good working knowledge of the kinds of foods and eating habits which are most beneficial.

Although I didn’t know it at the time, this book had its start in a doctor’s office in West Los Angeles, in October, 2008.

I had been thin my whole life and was very thin as a child and teenager. I was not a “jock” in school, and I did not like physical education or gym class in the slightest. When I first began to exercise – at the age of 30 – I wanted to add some muscle mass and therefore some weight. I was healthy, 5’11” tall, and weighed about 148 to 150 pounds, with no exercise history, although I had begun to pay more attention to healthy eating habits at age 29, for example by ordering fruit instead of French fries, and by eating more fish and less red meat.

Physically, I seemed to blossom in my 30s and 40s. My thin frame acquired some “tone”, some definition, some “cuts” – particularly my arms. I became stronger. I had also aged very gracefully and looked younger than my chronological age, that is, based on preconceived notions of what a certain age (40, 45, 49 – you name it) is “supposed” to look (or feel) like.

Okay, so a new me emerged in my 30s and 40s and was still there on my 50th birthday (in 2006). I had a lean, toned physique and good general health, and I looked and felt younger than what someone my age was “supposed” to look or feel like. In my 30s, my weight slowly increased (from the addition of muscle mass) from 148 to 153 to 158 and into the 160s. I weighed about 170 when I turned 40 and remained in the 170s throughout my 40s.
Fast forward to 2007 and 2008: A combination of factors led to what was for me an unprecedented gain in body fat (and weight, but from fat, not muscle) at the ages of 51 and 52. (I don’t have any pictures, but, trust me, the extra pounds were there.) I believe this was due to the long-distance commute to my job at the time (which, in L.A. traffic, often took hours a day away from my free time), the staleness of my exercise regimen (which some weeks had gotten down to twice a week of not-so-high-intensity weights and no cardio), and paying less attention than I should have been to my late-night carb intake. In addition to my work as an attorney (which involved the long commute), I was also on call part-time as a co-pilot on jet charter flights. My passion for flying aside, this further disrupted my workout schedule at times.

So, in October 2008 when I visited the doctor for a routine blood workup, I expressed my concern about my unprecedented body fat.

The blood workup showed some adverse changes in my health profile. The doctor said, “You’re not getting any younger.” My reply: “I refuse to accept that.”

The doctor went on to recommend more Omega 3 in my diet (no argument from me there) and said, “Lose five to ten pounds. Your numbers (triglycerides, blood pressure) should go back to normal after that.”

That alarm, that wake-up call, that unprecedented need to lose body fat and the statement “You’re not getting any younger” (to someone who had always looked and felt younger than he was “supposed” to, and who always had a lower body fat than the general population) ignited something within me.

I had engaged the services of a personal trainer during my first year of working out, and again for six months during my eighth year of working out in 1994. Both of these trainers were great, but we lifted weights (free weights or machines) inside the gym and did not cross-train.

In January, 2009, I hired another personal trainer, who I had met months earlier at the gym. I said to her, “Take me outside. Make me climb stairs. Make me run. And show me some new stuff in the gym. The doctor said to lose five to ten pounds; I want to lose at least fifteen and be more fit than ever.”

And so, at age 52, I began this leg of my journey: the discovery of my inner athlete, my renewed and greater-than-ever commitment to my health and fitness. I reminded myself that I had flown a plane as a teenager, that I had always done well in school, that I had drawn upon my inner strength when my parents died less than four months apart when I was 21, and that I had gone on to complete law school and pass the California Bar. This was my health, dammit. This mattered more than anything.

My trainer and I started working together in January 2009. I climbed stairs. I ran track. I sprinted and performed various outdoor drills. We tweaked my diet and added to my gym regimen. By April, the weight was off.

In terms of waist size, I had been buying waist size 33 for several years before the weight gain. Fifteen to 20 years before, in my early to mid-30s, I bought size 31 and 32. In late 2008, my waist size was approaching 35. In April 2009, I bought some 33s as I had before the weight gain, only to find that they were too big. I began buying waist size 32, which fit comfortably. So, in terms of waist size, we had turned the clock back fifteen to 20 years in less than four months.

But this wasn’t just about waist size. I was more fit than ever, and more committed to and passionate about fitness (and nutrition) than ever. Mission accomplished. (For my 53rd birthday on April 30, 2009, I did a strong outdoor stair session by myself in the afternoon, adding push-ups as well, and then I lifted weights in the gym that evening. Celebrating fitness was the best way to celebrate my birthday that year. The more standard dinner celebration had already taken place a couple of weeks ahead of time.)

As I write this is September, 2012, I have just received blood test results which indicate a very significant decrease in “bad” cholesterol, a very significant increase in “good” cholesterol, and a very significant decrease in triglycerides when compared to my blood workup of October 2008. The 2012 numbers are as follows: HDL (“good” cholesterol): 52; LDL (“bad” cholesterol): 75; total cholesterol: 138; triglycerides: 57 (the 2008 number was 270). These numbers are reportedly very good for a 56-year-old male, and were achieved through diet and exercise, without any medications. These numbers are not the only measurements of interest. Body weight, waist size, body-fat percentage, blood pressure, and other data are relevant, too. However, these numbers are one group of data to look at, and they have shown dramatic improvement since that doctor’s appointment in October 2008 . (My 2012 results also indicated the lowest possible results for the C-Reactive Protein test, which was not performed in 2008.)

Back to 2009: After a couple of months of training on my own, I resumed workouts with my trainer, although somewhat less frequently than before. (During and after the weight loss, the sessions with my trainer were not my only workouts. Sessions with her were always in addition to training on my own in the gym. At this stage of my fitness evolution, my trainer’s role included the cross-training realm. Beginning exercisers who employ a trainer will typically train only with their trainer at first.) During this post-weight-loss period of training, my fitness level reached greater heights as my trainer introduced new and more challenging elements to my workouts. My passion for fitness was now fully unbridled. When I wasn’t working out, I needed to be learning more about fitness, so I began to pursue my own personal trainer certification.

In December 2010, I was approached in the gym about being involved in a digital media project that required participants with good physiques. That particular project didn’t materialize, but meeting with the folks involved inspired me to consider my own digital media presence. In 2011, we video recorded some of my outdoor training. In 2012, I decided to take things to the next level with a website and blog (RobertHenryFitness.com), and with this book.

This book is about believing in yourself, maintaining inner strength, and understanding exercise, fitness, nutrition, and wellness. This book is also about getting younger instead of getting older, discovering your inner athlete, and becoming and remaining healthy and fit in both body and mind.

Because I’m well into my 50s, and because of my own recent history, in writing this book we have focused on persons over the age of 40. However, my own fitness awareness began at age 29 and continued to evolve throughout my 30s, 40s and 50s, and is still evolving. Fitness, good nutrition, and wellness benefit people of all ages. So, even if you’re in your 20s or 30s, you’re welcome to come aboard and to keep reading.